For many years in our Hungarian Vizslas – in  US, Australia and New Zealand particularly –  there has been much speculation about “head deformities” “skull defects” “malformed skulls” or “cranial muscular atrophy” 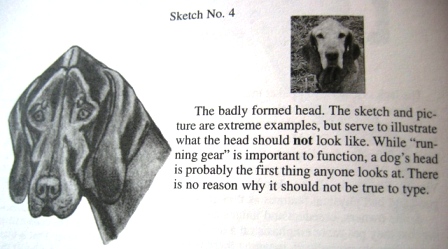 The captions and text describe “enlarged frontal bones” – possibly as a “recessive trait” Later in the same book it was said  “…on closer inspection it was found that the temporal and masseter muscles are atrophied causing these bony prominences to become exaggerated. Evident by the time the dog reaches six months of age, the top of the head has a ridge that is not flattened by the presence of muscle”

The appearance of these dogs closely resembles that of the UK vizslas currently contributing to the research into polymyositis but in previous observations about “cranial muscular atrophy” there was never any mention of associated illness or requirement for veterinary intervention. Affected dogs were reported to have had a normal life expectancy. Boggs wrote though that some affected dogs were known to have had difficulties because their compromised muscles made retrieving large heavy birds a challenge.

” are free of serious hereditary defects including >>        cranial muscular atrophy) …. “

In Australia and New Zealand  the “deformed head” problem was widely acknowledged as having arrived “with the imports” (these were largely from the UK) and it has been variously described by several authors.

In 1977 Boggs attended the International Budapest Dog show in Hungary and observed “Unfortunately there were some with the skull deformity. Somehow, I had expected that their controlled breeding might have eliminated that problem”

A Hungarian study declared “Further disorders originating in allergies or a malfunction of the immune system are myositis eosinophylica-cranial and cervical atrophy, which, albeit insignificant in frequency, do sometimes occur ” (Dr. Andrea Pallós -The generic health and typical diseases of Hungarian Vizsla breeds)

There is no literature to report the historical incidence of cranial muscle atrophy in the UK vizsla. This does not mean that the condition did not exist. The authors are only now receiving anecdotal (and substantial) reports of “affected” UK vizslas dating back to the late ’70s early ’80s. As Boggs said in his book ” Breeders can be very secretive about problems they encounter with their breeding”

All previous research/commentary has speculated that a recessive gene is responsible for the “head problem” It remains to be seen whether these past vizslas will be deemed relevant to the current research into polymyositis. We suspect that time will prove them to be not insignificant.

Past History – the shape of things to come? 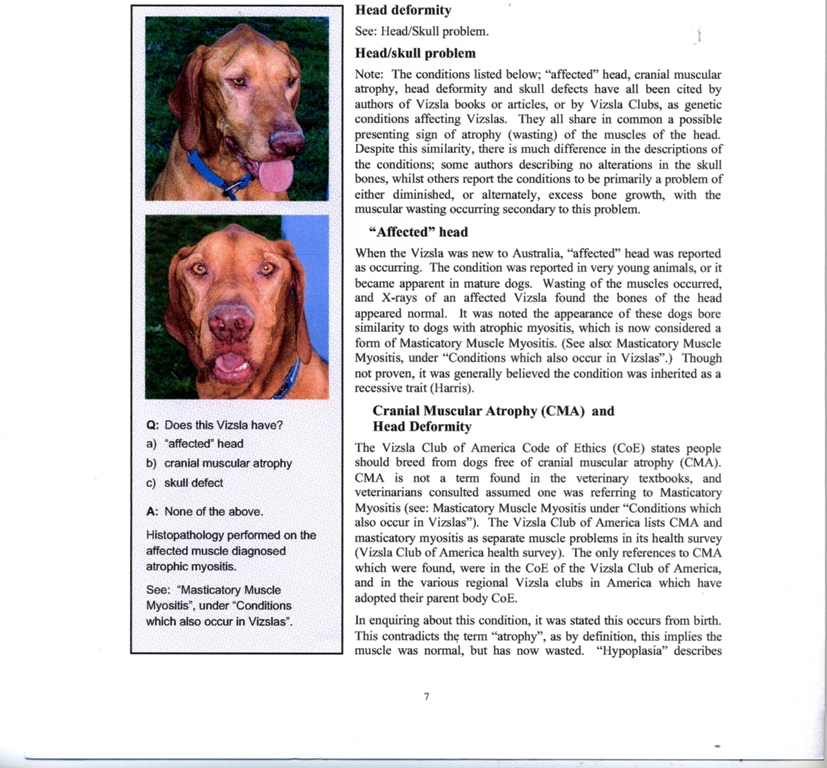 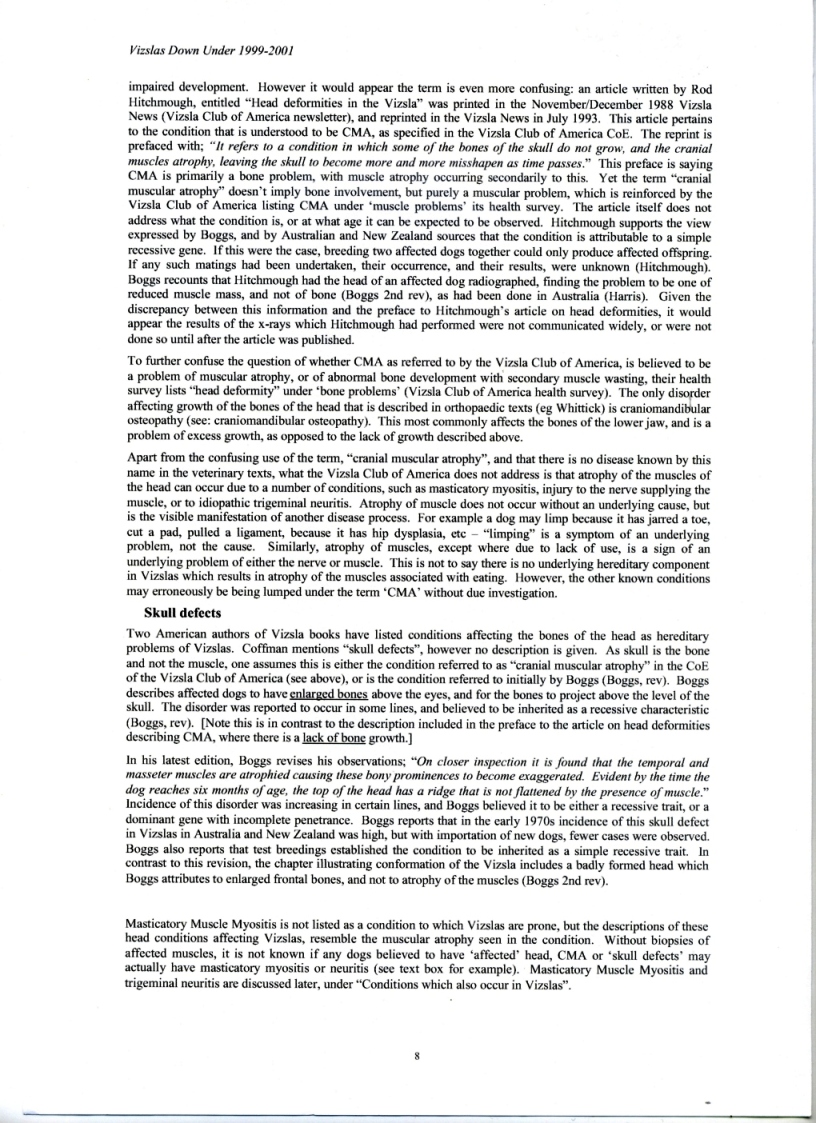 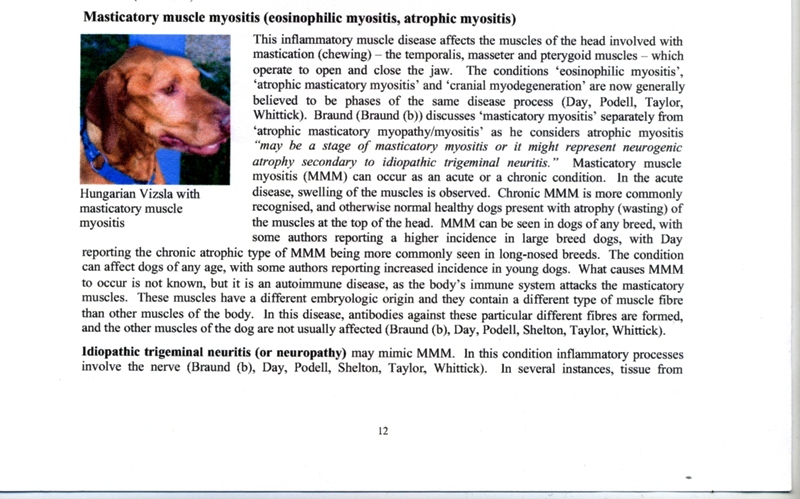 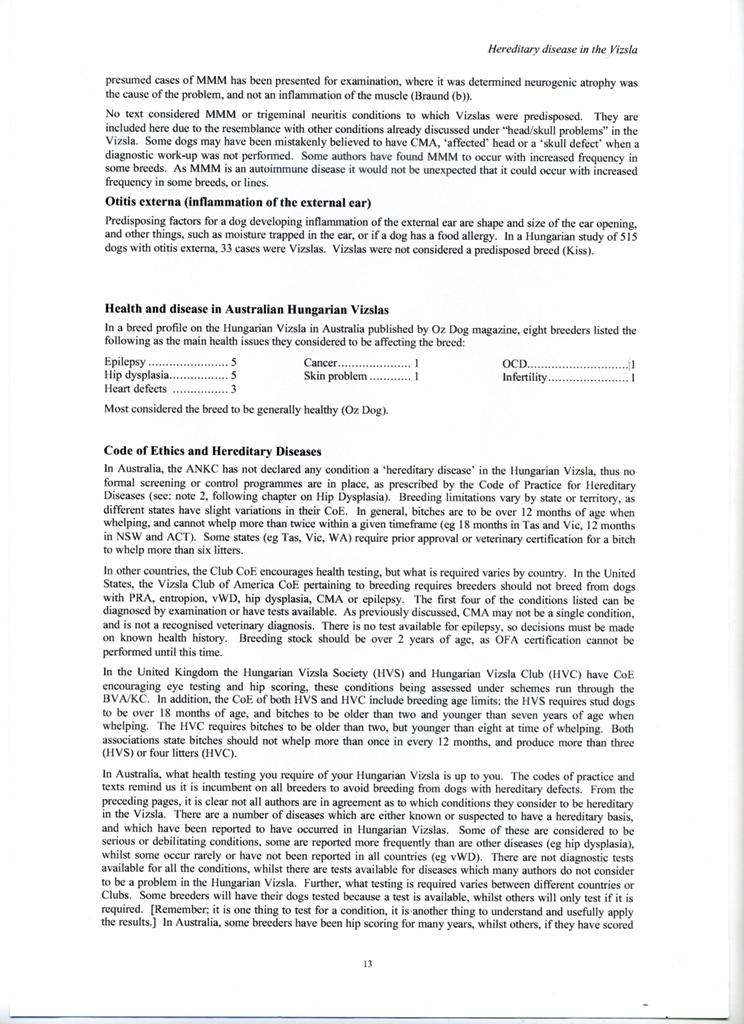 Note:  the preface to the reprint of Hitchmough’s article was not written by Hitchmough