Sebaceous Adenitis is an inflammatory disease process – directed against the skin’s sebaceous glands, resulting in their destruction. Sebum production is compromised and scaly lesions result. These mostly affect the trunk, head and ears. Pruritis (itchiness) is common. Diagnosis can be confirmed by a punch biopsy of an affected part of the skin. Sebaceous Adenitis (SA) is a veterinarily acknowledged predisposition in vizslas. You can read more HERE about diagnosis and treatment – which may be topical or systemic.

Conventional therapies for SA often involve the use of steroids but vizsla owners are reporting great successs with a less invasive approach.

These are pictures of Maddy

And here she is after treatment – that did not involve drugs

Here is Tucker’s story – told in December 2012 by Matt Zeeman – from US. He kindly acknowledges the help and support given to him by Heather Black and Joanne Woodhall – both of whom have generously shared information gleaned from the experience of successfully treating their own vizslas. With care and great patience this is a disease which can respond very well to topical treatments.

Tucker is my 6 year old male Vizsla that I purchased from a reputable and well respected Vizsla breeder in Bloomsburg, Pennsylvania, USA. Tucker has been a wonderful dog and companion throughout having him. After outgrowing the typical Vizsla period of 4 years of craziness, hes turned into a perfect gentleman of a dog and is a pleasure to be around. He has never had any major health problems. Every January we take him to the vet to get his annual vaccinations and hes had a broken nail once or twice but other than that, a healthy, fit and athletic Vizsla.

In May of 2012, Tucker started developing dry skin around his ears, and puffy eyes. His behavior did not change, but he did begin to lick himself a lot, and rub his head against the carpet. At first, we thought it was an allergy to his food, so we immediately changed to a different brand. When his condition began to worsen, we brought him to our veterinarian for a check up. She took a swab of his ears and a small skin scraping thinking it was some kind of mite. When the results came back negative, she gave us some antibiotics and a shampoo to use in case it was a mite of some kind. She recommended an animal allergist which I didn’t think was the best action to take as its upwards of $1,000 to walk in the door, and I expected the vet to do a little more work before pawning the issue off on someone else. We spoke to a friend who recommended us to another vet. After meeting with the new Vet, she took another skin scraping and gave us a different shampoo and antibiotic to try out for 2 weeks. As I was leaving, she mentioned it may be something called “Sebacious Adenitis” which I had never heard of. She had not seen this condition to often and literally just found it in a book while I was making my next appointment. She advised if his condition didn’t get better with the antibiotics and shampoo, she would take a skin punch and have it sent to her lab to confirm the condition she thought it may be

After 2 weeks, Tucker’s condition had worsened considerably. He had lost almost all his hair on his head, was patchy on his body and his back was looking horrible. You could tell he was miserable and was grumpy. During this period, I stumbled upon a website with pictures of Maddy, a Vizsla with similar symptoms. I emailed the owner of the posting, DI Addicott, and asked for suggestions on how she treated her Vizsla. She put me in touch with Joanne Woodhall who recommended a holistic approach. The recommendations at first seemed odd, but at this point, I was willing to try anything to get my boy back to his normal self. We brought Tucker back for the skin sampling and the vet confirmed that it was S.A. and I advised her of the treatment I was going to try first before using any pharmaceutical remedies. We found the majority of the products at the Vitamin Shoppe and Super Market.

The regimen included the following:

Omega 3-6-9 Oil Pills
Cod Liver Oil Pills
Evening Primrose Oil Pills
These pills were given 2x a day (400mg each pill)
We also used Almond Oil and literally slathered his head and bare spots with this oil.
With his food, we gave him an entire can of Tuna in Oil every day, and on Sundays we would also give him a full can of Sardines in Oil.
Lastly, 1x a week we would give him a bath with Quistel Dog Shampoo/Conditioner. It is expensive, but its worth it.

Its now almost Christmas and Tucker is almost back to normal. I would say the hair regrowth is 100% on his body and about 90% on his head. Its a little thin around his ears but not much different from when he was a puppy. 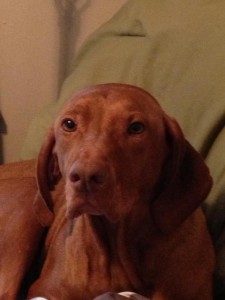 The Sebaceous Adenitis condition is apparently rare, but it is something to be aware of. If you have a Vizsla and are seeing signs of hair loss, do not ignore it.

Thanks to Heather and Joanne, Tucker is himself again and they have saved me thousands in medical bills I would have had if I hadn’t found their website. The pictures attached are the beginning of when he started showing symptoms, when it was at his worst, and now.

Owners – do not despair! We are always happy to put people in touch and also strongly advise joining a forum called CIMDA – Canine Immune Mediated Disease Awareness. Here is the link Also please take part in the AHT research in to the disease link