EXTRACTS FROM THE VIP PAPER

Sixty-one of 77 of the cases were treated with immune-suppressive doses of corticosteroids either as a monotherapy (32/61) or in combination with other immunosuppressive treatments (29/61). For the other 16 of 77 dogs, no treatment details were stated in the clinical record. A combination of immunosuppressive agents was considered preferable to reduce long-term corticosteroid side effects and/or when the clinical response to monotherapy was poor. The most common polypharmacy was prednisolone and azathioprine (25/29). Less commonly, ciclosporin was used in combination with prednisolone (2/29) or with both prednisolone and azathioprine (2/29). Leflunomide was used as an adjunct drug in one case in association with corticosteroids. Two cases were treated with methotrexate, either with corticosteroids or in combination with corticosteroids and azathioprine. The typical initial glucocorticoid dose was 1-2 mg/kg prednisolone twice a day, whilst azathioprine was used at 2 mg/kg or 50 mg/m2 once a day. Leflunomide was used at 4 mg/kg once a day, while methotrexate was given at 2.5 mg/m2 twice a week. The dosages were then tapered based on the response to treatment. Improvement of clinical signs especially sialorrhea, regurgitation, dysphagia was seen in 90% of the treated dogs. Unfortunately, we were unable to evaluate time frame to improvement due to lack of detailed temporal data, however the use of anti-inflammatory dose of corticosteroids or a rapid tapering regimen with withdrawal of drugs within a 1-year period appeared to be associated with earlier relapse and increased mortality in 23% of the treated cases. Two dogs treated with azathioprine had adverse gastrointestinal effects (i.e. profound vomiting and occasional diarrhoea) and exhibited marked elevation in serum hepatocellular enzymes resulting in cessation of therapy. Ciclosporin was discontinued in one case due to severe inappetence, while the other three cases in which this drug was used had undetermined clinical benefit. Corticosteroid side effects such polyphagia, polydipsia, polyuria, and iatrogenic hyperadrenocorticism were found in 15% of the treated cases. Supportive treatments including gastroprotectants and pro-kinetics were also commonly prescribed such as omeprazole, sucralfate, cimetidine, famotidine, ranitidine, maropitant, metoclopramide, erythromycin (as a pro-kinetic at a dose of 0.5-1 mg/kg three times a day), and cisapride. Three cases were treated with phenobarbital on the initial assumption that their diagnosis was phenobarbital-responsive hypersalivation, but there was no clinical benefit reported. In the dogs with dysuria, one dog was treated with 0.35 mg/kg diazepam three times a day and the other with 1 mg/kg dantrolene twice a day and 0.4 mg/kg phenoxybenzamine twice a day, and both showed clinical improvement; the third dog was treated with phenylpropanolamine at the dose of 0.8 mg/kg once a day and diazepam at the dose of 0.25 mg/kg twice a day with no improvements, while corticosteroid therapy was reported to be beneficial.

VIP is assumed to be an autoimmune disease because of the response to immunosuppressive treatment. The cornerstone of the treatment is glucocorticoid therapy due to its short-term tolerability, cost effectiveness, and clinical effectiveness [66]. Particular care however must be taken if there is a risk of aspiration pneumonia as the adverse effects of polydipsia, polyphagia and immunosuppression increases the likelihood of this potentially fatal complication. As the individual treatment plans for the dogs in this study varied, it was not possible to make firm conclusions regarding treatment, but the trends suggested the following: (1) early diagnosis improves the chance of successful treatment; (2) therapy should be tapered slowly with time of tapering depending on clinical signs. We do not have enough data to strongly determine the dosage and the length of the treatment protocol for the VIP, however inadequate corticosteroid dosage i.e. anti-inflammatory dose or a rapid tapering regimen with withdrawal of drugs within a 1-year period appeared to be associated with earlier relapse and increased mortality in 23% of the treated cases. The optimal glucocorticoid dosing regimen is not well defined [13]; however, as a general rule we would suggest the following: 2 mg/kg once a day for 2 weeks, then 1 mg/kg once a day for 4 weeks, then 0.5 mg/kg once a day for 10 weeks, then 0.25 mg/kg once a day for 16 weeks, then 0.25 mg/kg every other day for 16 weeks then continue to withdraw over a further 2–4 weeks; (3) close monitoring is required and the drugs are tapered on the basis of clinical signs and the concentration of serum CK, if this test had shown abnormal result prior treatment.

In four dogs, dysphagia and regurgitation prevented the use of oral therapy, but there was a good response to initial parenteral short-term corticosteroid therapy such as with dexamethasone and prednisone acetate. Other parental corticosteroids such as methylprednisolone seemed to be less effective (two cases), however the difficulty of comparing different treatments used is a limitation of this paper and further study is needed to establish the most effective therapeutic protocol for this disease. This study also suggested that a treatment based on a combination of immunosuppressive agents was preferable to reduce long-term corticosteroid side effects such polyphagia, polydipsia, polyuria, and iatrogenic hyperadrenocorticism, reduce the risk of aspiration pneumonia and/or when the clinical response to monotherapy was poor. The most common and successful drug used in addition to corticosteroids was azathioprine; however, a well-designed prospective trial needs to be performed evaluating different treatments. The dosage of azathioprine used but we would suggest 2 mg/kg once a day for up to ten days, then 2 mg/kg every other day thereafter. Although our study cannot assess the most effective treatment protocol, we would advise that this dosage should be maintained for a month beyond the cessation of prednisolone. Again, this regimen should be adjusted on the basis of assessment of both clinical response and serum CK levels. 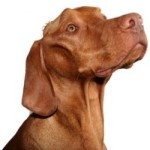